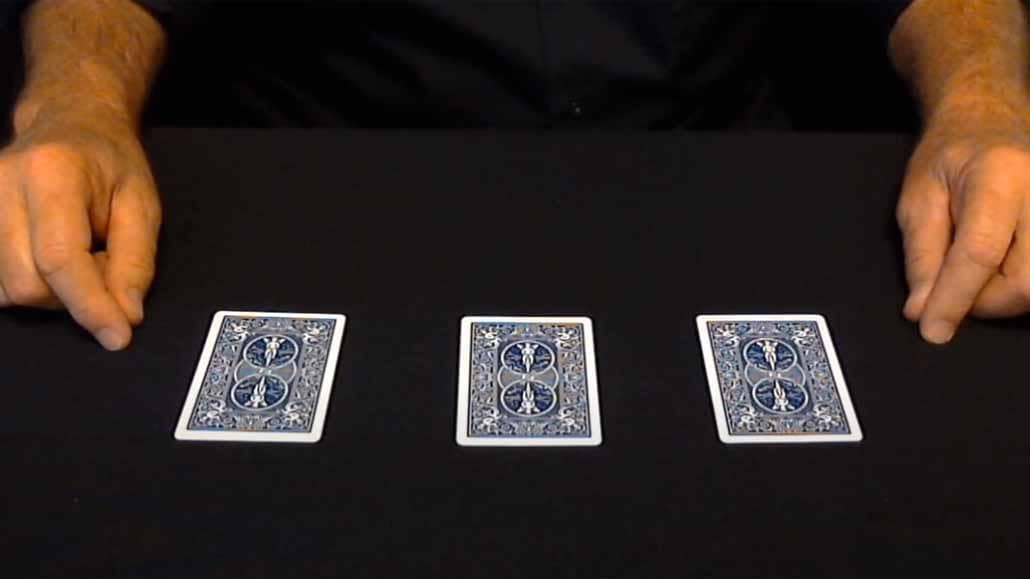 Seemingly a fair and straightforward game in which you make your luck by choosing your cards, 3 Card Monte is a straight-up con game where you have no chances of coming out on top.

This is because the game is rigged right from the get-go and you shouldn’t confuse it with 3 Card Poker. The dealer is always in complete control of the outcome.

Despite this, 3 Card Monte has been luring in unsuspecting and gullible players for centuries and somehow getting away with it.

If you want to learn all there is to this game, you’ve come to the right place. We’ll go over the history and rules of Three Card Monte and teach you how to play it step-by-step. Just promise not to abuse your newfound powers.

The origin of 3 Card Monte isn’t precisely clear, but it’s known that the game in the version we know today has been present for at least several centuries.

In the 19th century, notable conmen like Canada Bill Jones and Soapy Smith popularized the game among the general population with their outlandish public attempts (and successes) of scamming innocent bystanders in 3 Card Monte.

When it comes to the rules themselves, Three Card Monte is relatively simple and straightforward.

To start the game, the dealer lays three cards face down on the table, usually on a makeshift surface or a cardboard box, which gives them the ability to disappear quickly if caught in their scam.

The dealer first shows the unsuspecting player the money card. He then adds it to the remaining two cards and quickly rearranges them to confuse the player which card is the target one. 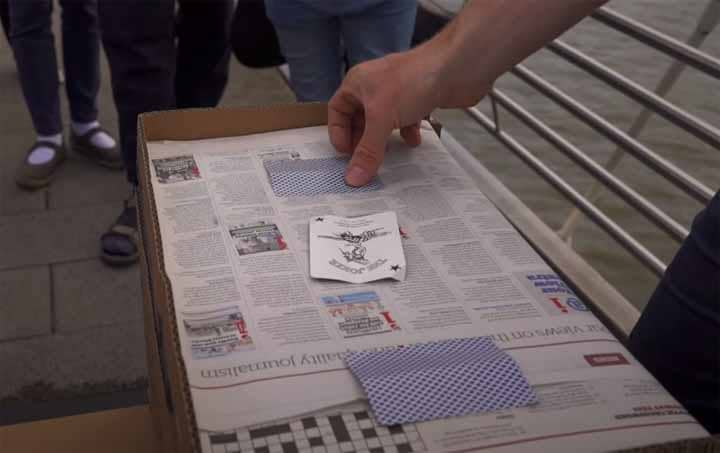 After this, the player has one opportunity to pick out the money card from the three cards on display. If he guesses correctly, he wins twice his original stake. If he misses, he loses the bet and his stake.

As the name says, 3 Card Monte only involves three cards. In most cases, a queen of hearts is used as the money card, while the other two dark cards can be any matching two from the deck.

3 Card Monte Tricks Swindlers Use To Draw Players In

Going by the rules above, 3 Card Monte sounds like a normal guessing game, in which all you need to win is a good observation and a smidge of luck.

But, there are many little tricks and underhanded techniques dealers employ to scam the player without him even realizing it.

Here are the most common 3 Card Monte tricks that most swindlers use:

A common misconception is that most 3 Card Monte dealers let the mark win his first few games so that they can take all of their money later on. 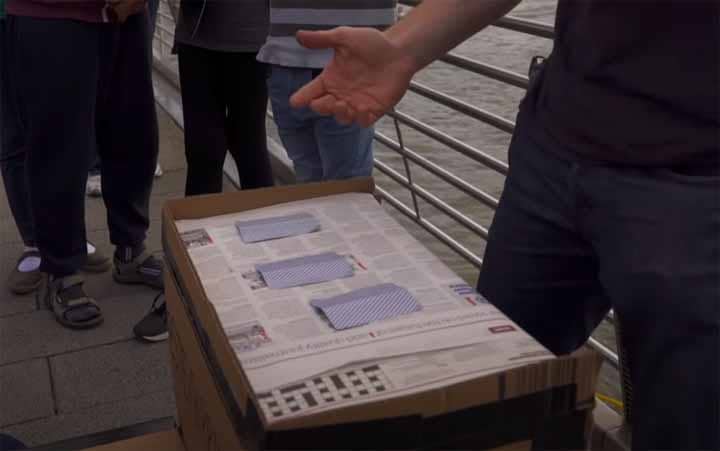 While this does sound more dramatic and serious, there’s no need for the dealers to do so. In a true 3 Card Monte trick, the dealer doesn’t let the mark win a single game, as this is completely unnecessary.

How to Play 3 Card Monte

Now that you know the basic outlines of the 3 Card Monte rules let’s discuss how they play out in a real-time game. Rules are much simpler than the rules of blackjack, for example, but you’ll need to learn a few tricks as well.

Here’s a quick but detailed 3 Card Monte tutorial that’ll help you learn this game step-by-step without too much effort:

1. Prepare the Tools for the Trick

First things first, you need to get two dark cards (identical if possible) and one red card that differs in numeration from the two dark ones. Slightly bend all three cards along the middles so that you can pick them up easier with your fingers.

2. Pick up the Cards and Set the Stage

This is when the action starts to pick up, and you need to place the cards on the table and start moving them.

You need to set the stage for the player to follow the wrong hand right from the start. To do this, you first must learn how to master the “fair throw” and the “fake throw.”

Turn your palms out to show the observers your cards. After that, first, turn your right palm down and, while moving your hand to the left, stop suddenly and release the money card to the table.

After you’ve mastered the fair throw, you need to master the fake throw. To make this move, you’ll pick up the three cards the same way you did previously.

The winning hand will be at the bottom of your right palm, and one losing card will be on top of it. Pay attention, as here comes the key part of the fake throw.

This time, when you go to throw the first card onto the table, you won’t throw the bottom card first. Instead, you’ll throw the top card first, which is the losing one.

To complete the fake throw 3 Card Monte trick, you need to release your index finger from the top card and immediately grab the bottom card with the same finger.

The observer shouldn’t notice this tiny gesture, as the whole sequence has to look completely natural. This part is a bit more complicated, as it relies on a sleight of hand moves, so don’t get frustrated if you have trouble picking up this trick.

To trick the observer into thinking they’re doing well, show them the cards again. Drop the winner card from your right hand, then the two loser cards right after in a row. Don’t do it too quickly, as you want the observer to think that the game is easy and that they know where the winner is at all times.

To execute the final 3 Card Monte trick, pick up all three cards again. Hold the cards normally and show them to the audience.

But, when dropping the cards, hold on to the winner and let one of the loser cards slide between your thumb and index finger onto the table first, just like you did when you pulled off the fake throw. 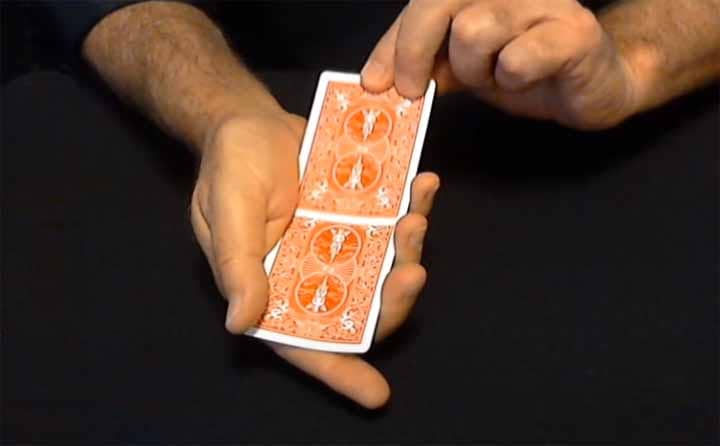 This is a simple way of confusing them into believing they have an advantage when they’ve already lost the game. You can also fool the observer into thinking that it’s a loser card when you’ve just dropped the winner and eliminated the observer’s chance of winning.

Drop the rest of the cards quickly after so the player doesn’t notice anything.

Even though it’s pretty straightforward and looks effortless, Three Card Monte requires a lot of practice to master. The third step, in particular, is the most challenging part of the trick to master as you need to execute it without any effort or trying to trick the observer.

With the information we’ve shared with you on this page, you’re well on your way to master this card game.

But, now that you know how to play 3 Card Monte, we urge you not to take it to the streets for anything other than fun or entertainment.

It can be an amusing little magic trick or a great conversation starter at parties, but you should stray away from trying to win real money by doing so.

If you want to try and win some money without putting in the hard work, you’re much better off trying your hand at video poker.

Not only is it immoral, but in many countries around the globe, it’s illegal. Playing 3 Card Monte could land you in prison if you trick people for real money or induce them to place bets at the game.

Remember that this game is primarily a short con, and if you use it for malicious purposes, you won’t have a good time for long. For these reasons, only use 3 Card Monte tricks to have fun and entertain others, and you’ll undoubtedly be the life of every party.