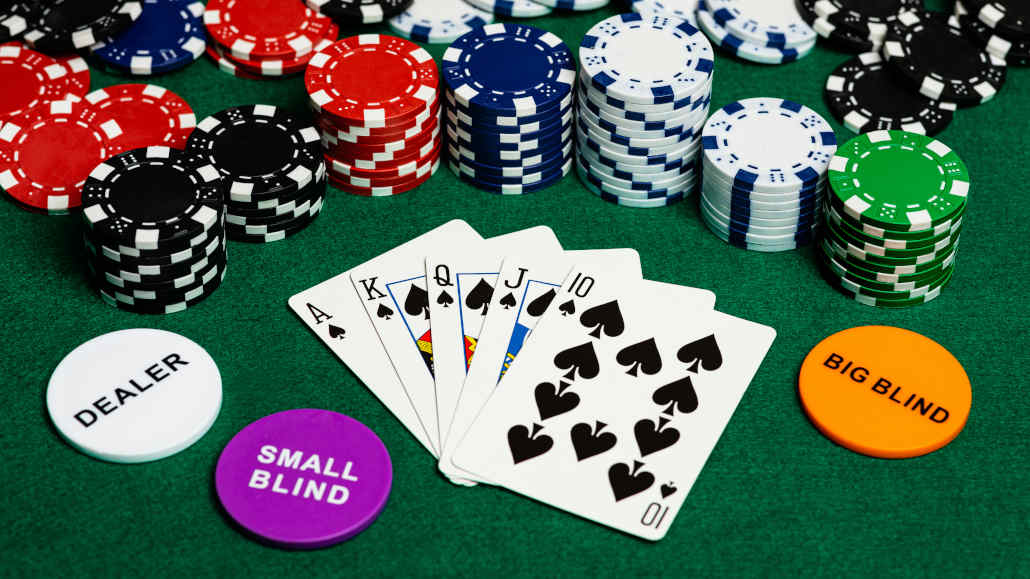 A poker position is one of the most important elements in poker. It is used as the basis for many things, including blind distribution, strategy development, and the creation of different approaches.

It is safe to say that without understanding poker positions, it is impossible to be a decent poker player.

In this article, we will teach you everything you need to know about poker positions in general, as well as individual positions and how to approach them.

Poker tables usually host anywhere from nine to two players depending on the format and situation. In this case, we will be explaining table positions at the nine-handed table since it covers all the positions you can encounter while playing.

Before we start explaining different poker positions, we first must explain the concepts of the small blind, the big blind, and the button.

The button got its name thanks to the round disk that is used to mark this position and indicates which player is last to act on each street after the flop.

On the direct left of the button is the small blind. This is the position that acts first on every street after the flop.

On the direct left of the small blind is the big blind, the player in the big blind acts second on every street after the flop.

The small blind and the big blind are the only two positions at the table that must put money in the pot before the hand even starts.

After each hand, the big blind, small blind, and the button move one position to the left. This means that in each orbit, the players are in different positions.

At the nine-handed poker table, the term “early position” is used for three positions that are first to act preflop.

These three positions are UTG, UTG+1, and UTG+2. The acronym UTG stands for “under-the-gun” and refers to the player that acts first after the cards have been dealt. 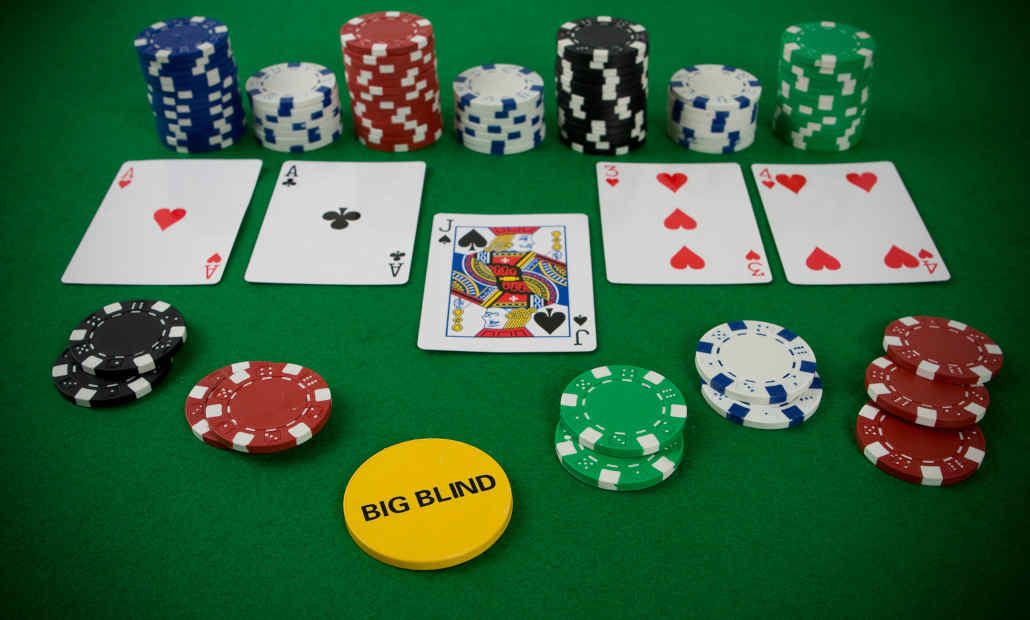 Because no one has acted before them, players in the early positions have the least information, which makes these positions the hardest to play preflop.

Poker charts that you can find online always recommend that you should play very few hands from these positions because there is a higher chance that someone will wake up with a good hand in the remaining positions.

The “hijack” is known under the same name in the 6 max or the six-handed table, while the “lojack” is referred to as UTG since it is the position that acts first preflop in six-handed games.

The “cutoff” and the “button” are considered late positions in both 6-max poker and 9-max poker.

The abbreviations for these two terms are CO and BTN, the CO is on the direct left of the HJ, and the BTN is one place to the left of the CO.

These two positions are considered the best positions at the table (the BTN is the best while the CO is the second-best) because they act last after the flop in each hand.

Because they can utilize their position the best, the CO and the BTN should have the widest opening ranges at the table.

The Small Blind & The Big Blind

The “small blind” and the “big blind,” also known as the SB and the BB, are the two worst positions at the poker table (the SB is the worst while the BB is the second-worst) for a couple of reasons.

Firstly, they are required to put money in the pot before the hand even starts. Secondly, they are first to act on every street after the flop (first SB, then BB). 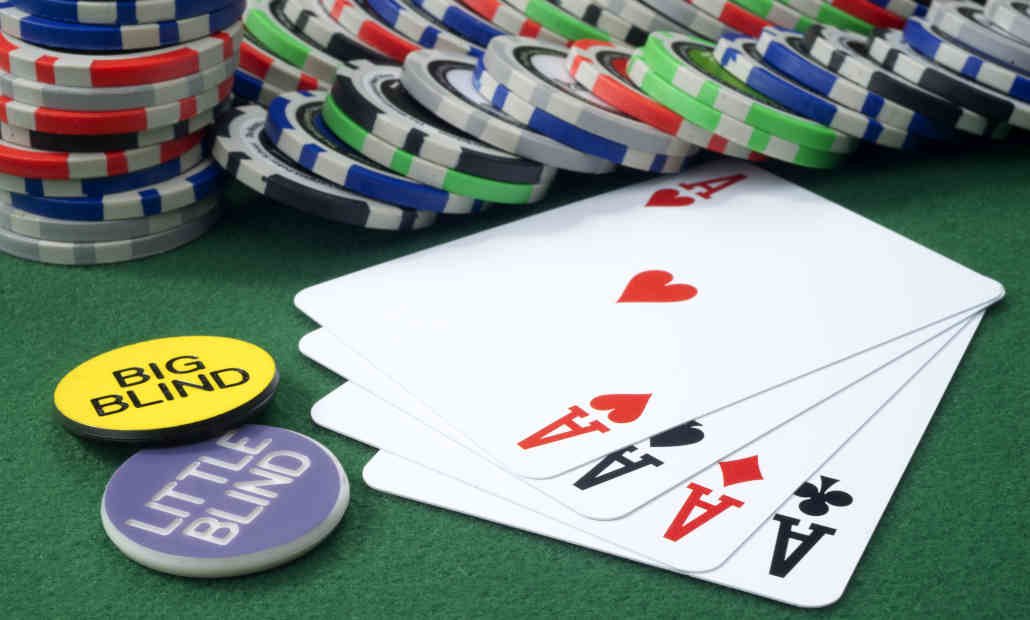 This rule exists to incentivize players to fight for pots and prevent them from waiting only for premiums before getting involved in the hand.

Don’t be fooled by the fact that they are the last to act preflop. Being in position preflop can never make up for being out of position post-flop. This is why even top poker pros lose money in these positions over the long run.

Poker Positions At The 6-max Table

6-max tables are the most common format used for online cash games. Since there are three players fewer in this format, the situation with the position is a little different.

For example, the 6-handed play also starts with UTG, but in this format, it is the only player considered to be in the early position. With this said, here are all of the 6-max poker positions:

Because there are three players fewer to act, the opening ranges in 6-max poker are much wider than in 9-max. This means that the UTG in 6-max can open the same ranges as lojack (LJ) in 9-max. 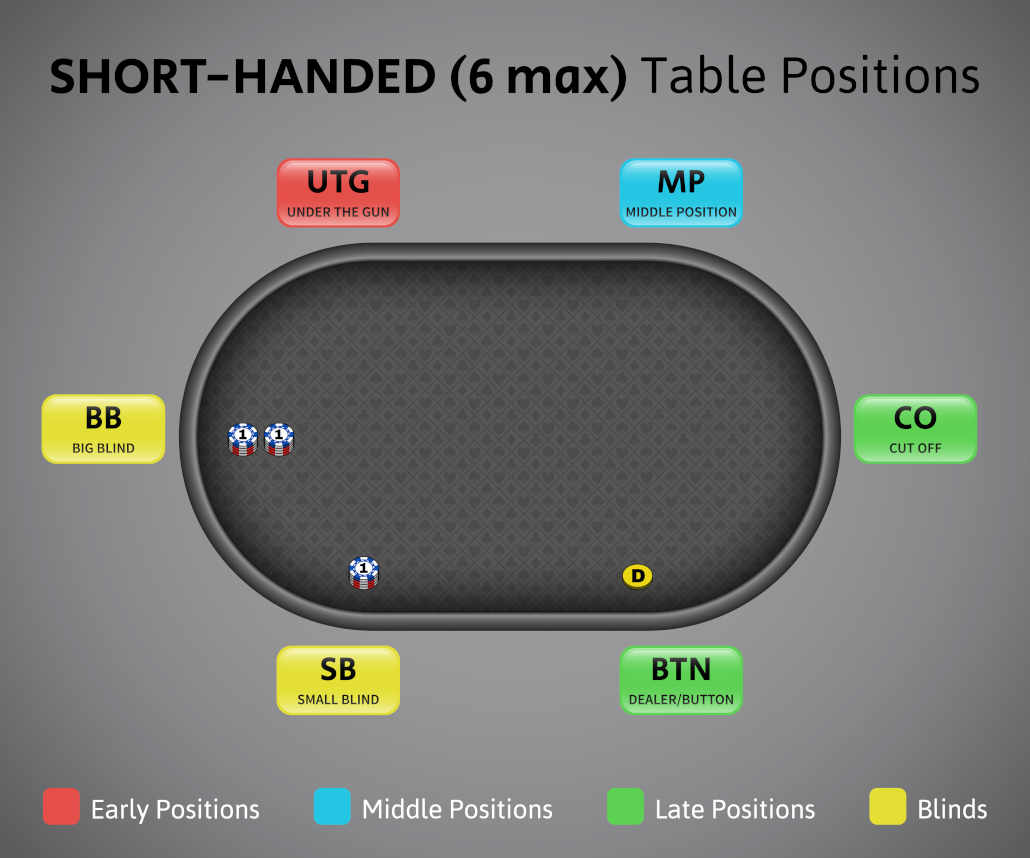 The Advantage of Position In Poker

When talking about poker, there are two ways in which the word “position” is used.

First, the position can be used to explain in which position someone is sitting at the poker table. In this case, most poker players will use abbreviations such as: “I was UTG while he was on the BTN.” or “Hero is in the LJ, and the Villain is in the SB.”

The second way the term position is used is to explain who acts last in the hand after the flop.

Depending on the number of players in the hand, their positions are relative to one another, meaning that a player can be IP in relation to one player but OOP in relation to another.

There are many reasons why being in position at the poker table is superior to being out of position, and we will discuss them below.

Players in Position Have the Opportunity to See Free Cards

Seeing free cards is one of the most obvious advantages of playing in position. Because you are last the act, you can decide to check and see additional cards that can improve your hand.

On the other hand, if you are playing out of position and want to see a free card, the only thing you can do is check and hope that the player in position checks after you.

Let’s say you open 9h10h from the CO, and it folds to the BB who calls. The flop comes 2hAsJh, and the BB checks.

Because you are in position, you can decide to check your flush draw and take a free card that might improve your hand.

Now let’s take the same hand but in different positions. You open 9h10h from the UTG and the CO calls, and the rest of the table folds.

The flop comes 2hAsJh, and you want to see a free card with your flush draw, so you check. Now, the action is on the CO, who decides to bet and thus denies you from seeing a free turn card.

Position Allows You to Better Control the Size of the Pot

The position allows poker players to control the size of the pot more easily since it gives them the advantage of acting last on every street.

Since you have a set of 3s, you decide to bet $3 to increase the size of the pot and prepare it to put as much money as possible on the turn and river. 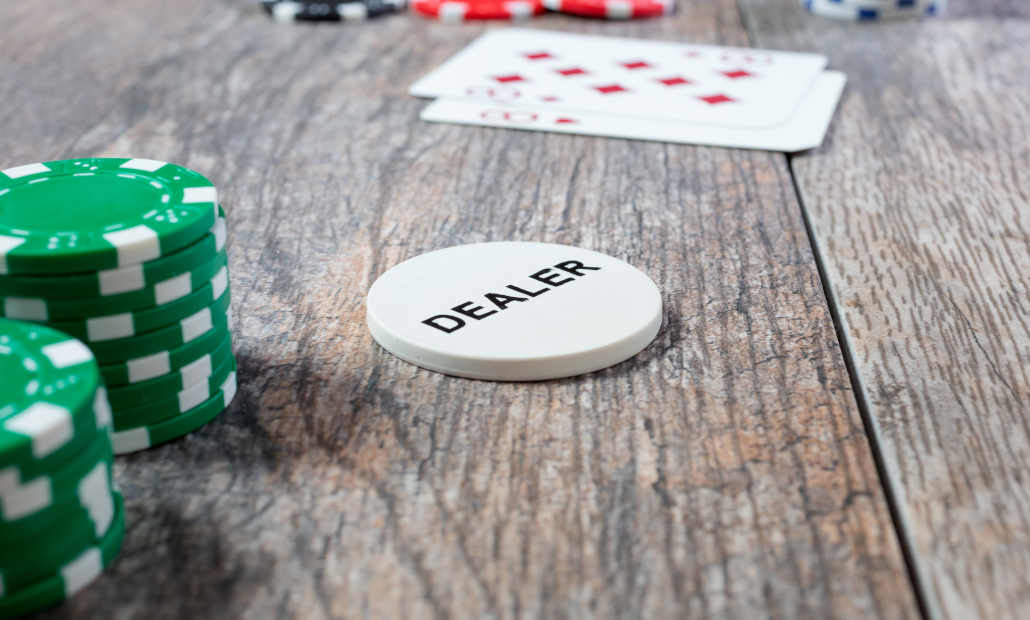 If we switch places, the situation is different. You are playing in the same game, but this time you are in the BB with 3h3s, the BTN raises to $2.5, and you call.

The pot is $5.5, and the flop comes Ah7s3d, giving you a set of 3s. You check to the BTN as he is the preflop raiser, but he decides to check back, and the size of the pot stays $5.5 with two streets to come.

In this scenario, you lost one whole street of value and missed a chance to inflate the pot for future streets just because you were out of position during the hand.

This statement mostly refers to multi-way pots in which players in position have a much easier time determining what they should do in the hand based on pot odds they are getting.

Imagine a situation in which you are playing NL100 6-max, the UTG makes a $3 raise, the CO calls, you are on the BTN, and you make a call with QhJh, the SB, and the BB fold.

You know that you have around a 20% chance of hitting the flush draw on the turn, and because you are last to act, you can calculate your pot odds accurately.

In this case, you need to pay $7 to win $31.5, which means you are getting the correct odds to call, making your decision easy.

Now let’s imagine that you were in the CO instead on the BTN. The UTG makes a $3 raise, you call with QhJh, and the player on the BTN also calls the SB and BB fold.

UTG bets $7, and it is your turn to act. In this situation, you have the same hand on the same flop, but you don’t know what the BTN is going to do since you don’t have position on them.

There is $17.5 in the pot, and you are not getting the correct odds to make a call with your flush draw. This puts you in a very tough spot.

Poker is a game of information, and, as you saw in the previous paragraphs, one of the main advantages of playing in position is the fact that you have more information on which you can base your decisions.

To explain the power of information, let’s imagine an NL100 6-max game in which you raise $2.5 with 6h6s from UTG and BTN calls with 6c6d; the rest of the table folds.

The flop comes Ah8s3h, and since you have a mediocre hand, you decide to check.

Even though you both essentially have the same hand, the BTN has more information about your holding because you had to act first.

In this case, the player on the BTN can decide to turn his hand into a bluff and bet, which will put you in a tough spot.

If the situation was the other way around, you would have the opportunity to make a move after your opponent has checked, which would give you the upper hand in similar situations over the long run.

To demonstrate this, we will use one of the most common situations in poker. 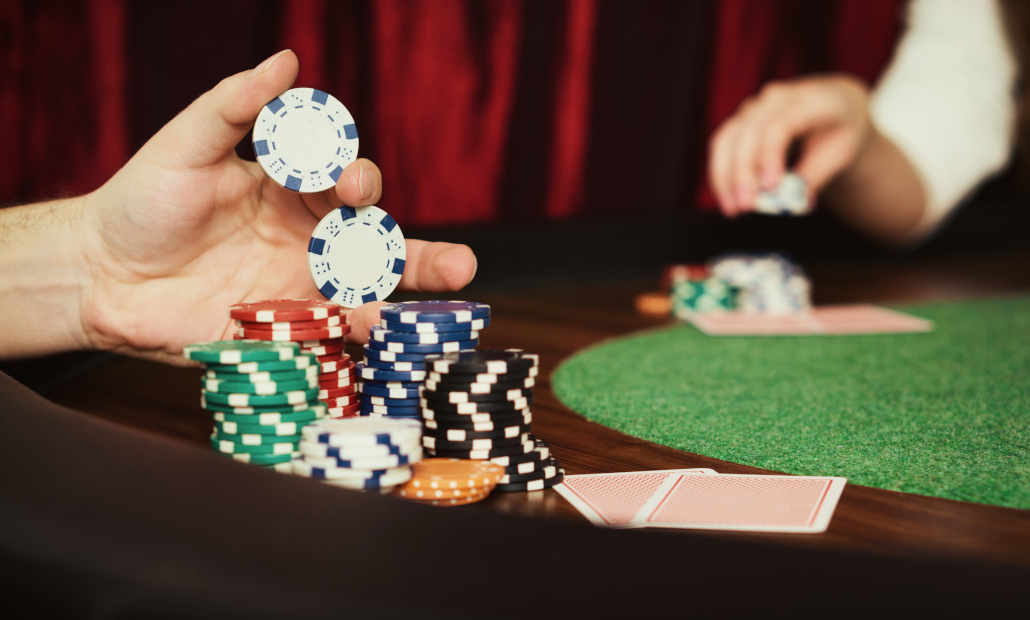 The river is Kd giving, completing your flush. You check, and the BTN decides to take his top pair to showdown and checks behind.

In this case, the fact that you were out of position prevented you from extracting the maximum value from your hand.

To put things into perspective, let’s take the same situation, but this time the villain is in the SB instead of BTN, and he raises $2.5. You call in the BB with 7d6d.

You show your flush, the BTN mucks his top pair, and you win $39.

In this case, because you were in position, you were able to make one extra bet and make $10 more.

As you can see, the position is one of the most important aspects of poker, and without positional awareness, it is impossible to achieve good results!