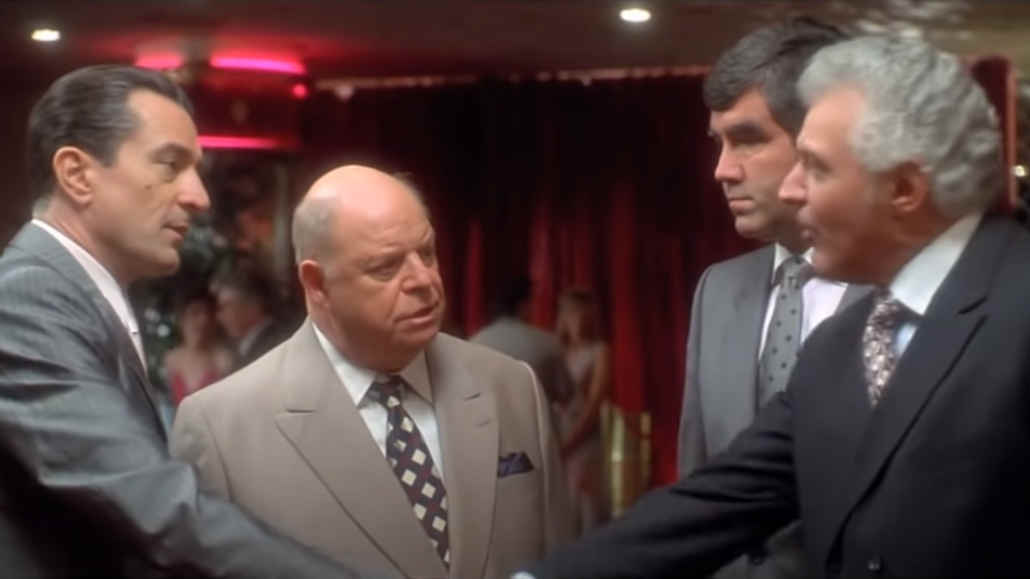 The iconic gambling movie Casino came at the height of mob and thriller movies in the 90s, following hits like Scorsese’s Goodfellas and Tarantino’s Reservoir Dogs and Pulp Fiction.

This 1995 cinema masterpiece lasts a whopping 178 minutes or just under three hours, and, like most Martin Scorsese movies, it has specific pacing that keeps your attention for the entirety of its duration.

On this page, we’ll review the plot, backstory, and complex characters that made Casino an instant classic.

Since the legalization of gambling in Vegas during the first half of the 20th century, the city has become the biggest gambling destination in the world.

During the 50s and 60s, Las Vegas was hailed as one of the most glamorous and exciting cities in the US.

It attracted the biggest entertainers at the time and was a popular gathering place for people of all walks of life.

Casinos were popping left and right. All of this also made the city a prime target for mobsters looking to exploit the situation at the time.

But, while the mafia had a tight hold on the casino business, they never intended to go fully legal and primarily used these businesses to launder money.

Why is all of this important? Because knowing this sets the scene for the beginning of the movie, as the story of Scorsese’s masterpiece begins in 1968.

That said, before we go deeper into the plot, we should highlight that Casino says that it’s “adapted from a true story.” This makes it less historically accurate than Goodfellas, which was “based on a true story”.

In other words, while none of the characters in Casino are named after any real-life people, many of the events depicted in the movie did occur, with slight differences. In this sense, Casino should be viewed as historical fiction.

In 1968, an infamous and very successful sports handicapper Sam “Ace” Rothstein, is sent by the Chicago Mafia to Las Vegas to operate the struggling Tangiers Casino.

But, as he has many legal issues with the government, he can’t be officially appointed to run the casino. Instead, the mafia puts a frontman to serve as the CEO while Ace manages everything from the shadows.

In little time, Ace shapes up the casino and manages to double its profits by skimming cash directly from the count room. To protect Ace and ensure that this success continues into the future, the Chicago Mafia bosses agree to send Nicky Santoro to Vegas.

Nicky is a respected and feared gangster who keeps Ace safe but also frequently falls into trouble on his own.

As Ace continues improving the casino, he remains a consummate professional and does his best to stay out of trouble.

However, one day, while reviewing a TV security monitor, Ace spots Ginger, a high-priced call girl and hustler, on the screen and instantly falls in love.

Not knowing that she will bring him the trouble of a lifetime, Ace puts his heart and soul into swooning Ginger. He showers her with gifts constantly, and she accepts to marry him after a few months.

The two have a child and wed in 1969. But, their relationship is soon tainted by Ginger’s past.

Fast forward to the early to mid-70s, the marriage has turned into a tumultuous relationship filled with problems.

Ginger falls deeper into the world of drugs and alcohol, and the two start having public fights and meltdowns. Even worse, Ace finds damning evidence that Ginger might be cheating on him.

In 1976, after some changes in the casino’s management structure, Ace’s license is denied, and his job as a casino operator is in jeopardy.

At this point of the movie, we clearly see Ace slipping from his usual patterns and starting to do unpredictable things that begin to irritate the mafia bosses back home.

Ace even goes so far as to start a local television show from inside the casino. This further infuriates Nicky and the bosses because of all of the attention Ace is drawing.

The ongoing police pressure grows even stronger as the two develop a big rift in their relationship. This is when the tense and thrilling Mojave Desert scene happens.

The tipping point comes when the Chicago Mafia bosses find out that someone on the inside is stealing from their skim.

They install an underboss in an effort to fix this. But, the FBI exploits the underboss’s incompetence and places a bug in his office. After learning enough details, they launch a full-scale investigation of the casino.

As we get to 1980, Ace grows increasingly unhappy with his relationship with Ginger and seeks to divorce her.

However, Ginger kidnaps their daughter and creates a plan to escape to Europe. Ace manages to convince her to return. But, as she comes home, he overhears her hatching a plan to kill him.

Soon after, Ginger starts an affair with Nicky. She asks him to kill Ace, but Nicky refuses. At this point, Ace fully disowns his relationship with Ginger and ends his friendship with Nicky.

One night, after Nicky kicks her out, Ginger gets drunk and crashes her car in Ace’s driveway. She takes the possessions out of their deposit box but is soon arrested by the FBI as a witness.

By 1982, the FBI had closed the casino and arrested most of the main culprits. The Chicago Mafia bosses are arrested and await a trial, Ginger overdoses, and Ace nearly escapes death, suspecting Nicky of planting the car bomb that almost killed him.

In 1986, the Chicago Mafia bosses order a hit on Nicky in what makes for one of the most brutal and memorable mafia deaths in cinema history.

With the FBI running the mafia out of Vegas, Sam escapes to San Diego, where he is last seen working as a sports handicapper.

The movie’s main character, Ace, is a Jewish-American expert sports bettor and gambler tasked by the mob to run the popular Tangiers Casino. Ace is an expert when it comes to money-making.

While he’s far from a hero, the description that best fits Ace is that he’s an anti-villain. He is not above using ruthless methods and destroying people’s lives. 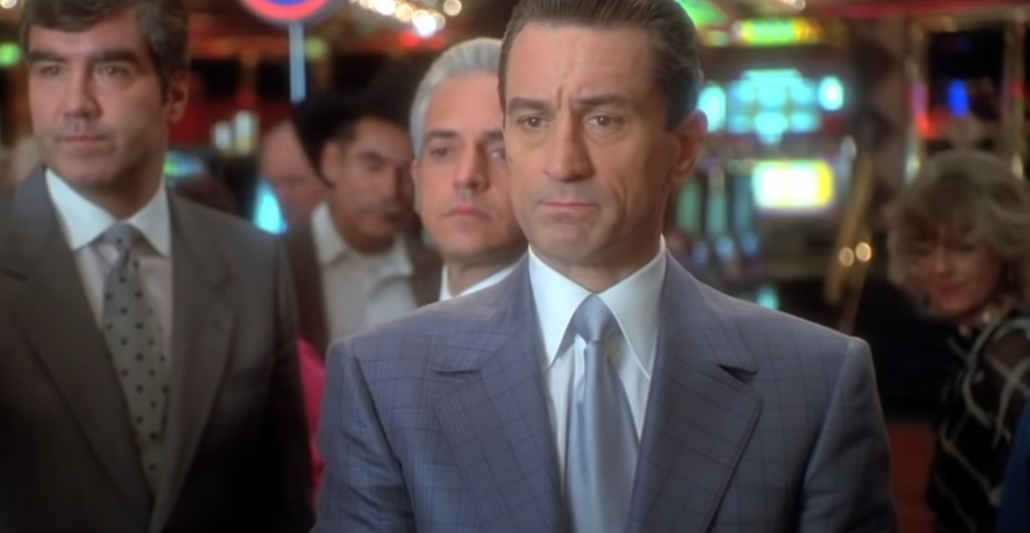 But, he also often serves as a counterweight to other characters and is not nearly as devious as most of them.

He is a professional that doesn’t tolerate incompetence and is often shown as a control freak. This is most obvious in the quintessential blueberry muffins scene. Still, he rarely gets his hands dirty and delegates others who he trusts to do so.

A notorious mob enforcer who runs the Hole in the Wall Gang. Nicky Santoro closely resembles another Joe Pesci character, Tommy from Goodfellas.

The major differences are that Nicky has some self-control and has managed to climb to a higher position of power.

Nicky loves being a gangster and thinks that his life will never catch up to him. He has a frightening presence around him and a psychotic tone that Joe Pesci masterfully plays.

He is a badly battered coke addict who dies a brutal death in the end. While you can feel for him at some points in the movie, you can clearly see that he sets himself on the path of demise and seals his own fate with his decisions.

Ginger McKenna doesn’t play into the classic trope at all, as she is a strong, fiery, and independent woman. She has both beauty and brains and is one of the top hustlers in the city.

Ginger has a “devil in plain sight” aura, as she is only in it for the money and will even manipulate her husband Ace if it brings her more material benefit. 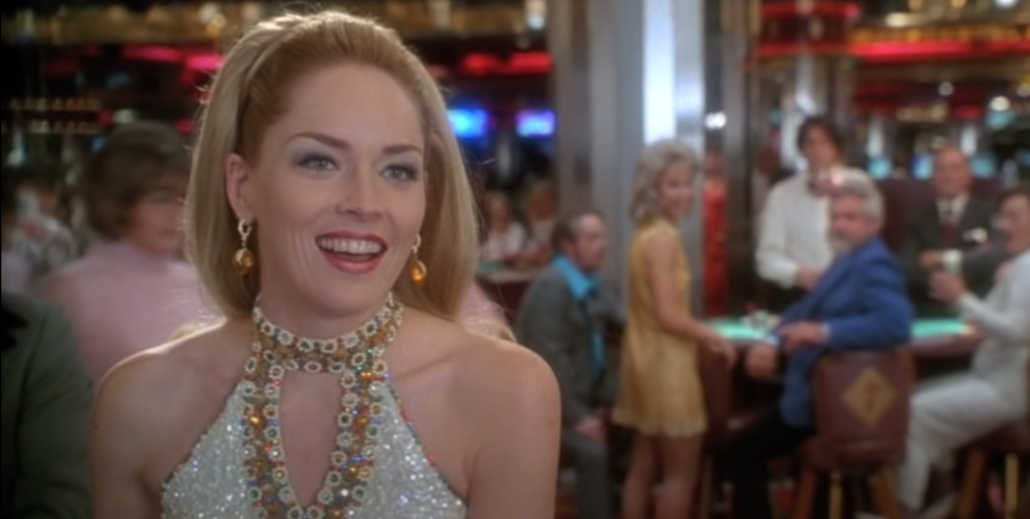 While Ace thinks he can change her from being a gold digger, Ginger is too selfish and self-centered to ever allow this.

Much like most of the characters in the movie, Ginger enjoys the good life in the film’s first half.

But, as the movie unwinds, she deteriorates more and more due to marriage problems, alcoholism, and drugs. In the end, she is another tragic character that ends up dead.

Scorsese pays attention to even the tiniest details in the movie. From the tacky decor to the period references, it’s the little moments that make Casino such a masterpiece.

Plus, the presence of a narrator, a recognizable element of Scorsese’s movies, is the cherry on top that completes the experience.

Many film critics often say that Casino glamourizes the mafia and underground lifestyle.

But, we’d argue that Scorsese paints a completely different picture, one that dissuades people from leading such a life by showing them how unglamorously it always ends.

Sure, most of the characters lead extremely luxurious and enjoyable lives at some point.

But, they are constantly turning their heads, fearful of their enemies, and can’t escape the fact that the end is coming. And, when the demise part finally comes, it’s brutal and unforgiving for everyone.