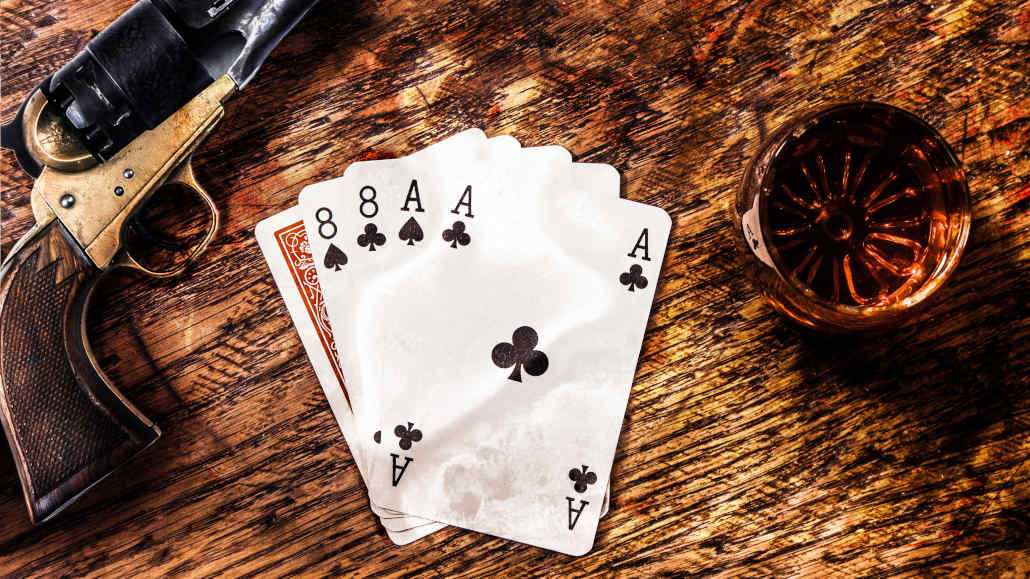 The Dead Man’s Hand is one of the most famous Wild West poker stories that have lived to this day.

It’s made a legend out of one player and ensured an infamous legacy for the other one. It has also been referenced countless times in various pop culture works.

So, do you know the story of the Dead Man’s Hand? What is it, and why is it called that? We will tell this interesting Wild West story sparing no details and also share with you a few other valuable facts and info you should know, especially if you’re a poker player.

What is the Dead Man’s Hand?

The Dead Man’s Hand is a gambling slang term for a two-pair poker hand made of two Aces and two eights, with all four cards being in black suits.

So, why is it called a Dead Man’s Hand?

It’s called this because it was supposedly the hand Wild Bill Hickok had when he got shot while playing five-stud poker.

So, while we’ll probably never find out how everything played out, here’s the widely accepted tale that’s been passed on through generations.

The story goes that one day in early August, Hickok played five-stud poker in the famous Nuttall & Mann’s Saloon in Deadwood.

At the same table, a man called Jack McCall joined the game a bit after Hickok. As McCall was heavily inebriated, he quickly lost all of his money to Hickok.

It’s said that Hickok only gave McCall enough money back to get something to eat. Additionally, Hickok told McCall not to play any more poker until he covers his outstanding losses.

The very next day, Hickok came back to the same saloon. Soon after, McCall walked into the saloon, approached Hickok from the back, and killed him.

When McCall shot him, Hickok fell and revealed his hand, containing two Aces and two eights, both of black suits.

There’s some debate as to which was the fifth card Hickok was holding, so there’s no widely accepted card. Because of this, the Dead Man’s Hand is most often depicted as a four-card hand. 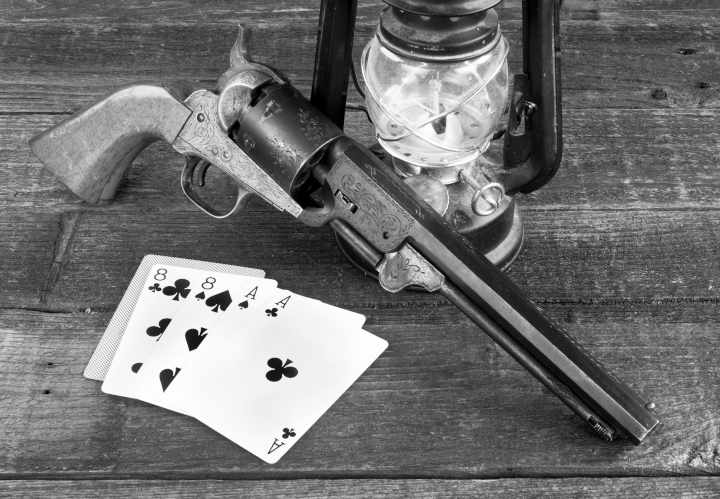 That said, there aren’t any sources that could reliably tell us that Wild Bill Hickok indeed had this hand when he got shot.

The earliest reliable reference that points to this expression dates back to 1886. However, it wasn’t connected to Hickok immediately.

It was only used to reference a full house made up of two tens and three Jacks. And, while Hickok was shot in August of 1876, the term “Dead Man’s Hand” was first connected to this incident sometime in the 1920s.

What solidified the Ace-eight two-pair hand as the Dead Man’s Hand in poker culture was the 1926 book Wild Bill Hickok: The Prince of Pistoleers, which was published exactly fifty years after McCall shot Hickok.

Who Was Wild Bill Hickok?

The story of the Dead Man’s Hand didn’t only become a Wild West legend because of its distinctiveness. In fact, there are many similar Wild West stories that exist and perhaps even more that have been lost simply due to the passage of time.

One of the main reasons why the Dead Man’s Hand poker story survived through the years and we know it today is the legendary reputation of Wild Bill Hickok.

Hickok was already highly revered during his lifetime, as he built up quite a reputation for himself on the Wild West frontier. He was a soldier, scout, lawman, gambler, and occasional actor.

But, he is perhaps best-known for his skills as a gunfighter. He gained notoriety as a skilled marksman, fighting and killing many robbers during his time as a vigilante, sheriff, and marshal.

Nowadays, we also know that many of his famous stories are likely exaggerated or even outright fabricated.

But, at the moment of his assassination, Wild Bill Hickok was already a legend, so this story gained major traction when it first started spreading around.

In a sense, his fame made the Dead Man’s Hand story more popular across the country, while the story cemented Wild Bill’s reputation as one of the Wild West icons.

There are many stories and myths that speculate why Jack McCall shot Wild Bill Hickok, but to this day, there’s no way to prove whether or not any of them are true.

The most popular explanation for why McCall shot Hickok is that he thought that he would get rid of his poker debts by doing so.

Another story says that he merely wanted to avenge his brother’s murder and that the debts had nothing to do with the assassination.

So, how did McCall even manage to draw out his gun and shoot Hickok before he could react? There are actually several things that allow McCall to have a crucial advantage and attack Hickok without him being unaware of what’s coming.

The stories of Wild Bill Hickok say that he always played poker with his back turned against the wall. This position allowed him to have a clear view of his surroundings and see what other people in the saloon are doing at all times. 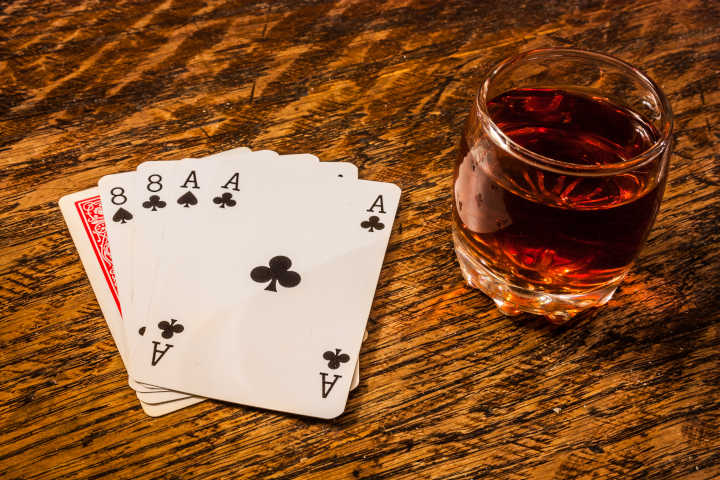 But, on the night of his murder, all of such seats were unavailable. So, Bill had to sit on a chair that had him turning his back on the rest of the saloon.

Coupled with the noise and the smoke in the room, Jack McCall managed to slip into the saloon and get close enough to have a clear shot.

Using a .45 caliber revolver, McCall shot Wild Bill in the back of his head while shouting “Damn you! Take that!”. Wild Bill was dead on the spot and McCall ran out the back door.

Was Jack McCall Ever Caught?

Yes, Jack McCall was apprehended shortly after he murdered Wild Bill Hickok. As he ran out of the saloon, he tried to saddle up his horse and make a quick getaway.

But, unfortunately for him, McCall didn’t notice that the saddle was loosened, so he fell over almost instantly.

He was caught by a few men a few minutes later. However, after an impromptu trial, McCall was found not guilty by a make-do jury made up of local miners and businessmen.

After being pronounced not guilty, McCall left Kansas and moved into Wyoming Territory.

While in Wyoming, McCall bragged in every saloon he visited about how he fairly killed Hickok in a gunfight.

The twist came a few months after the murder when Wyoming authorities announced that they didn’t recognize the previous verdict. He was soon tried again and sentenced to death by hanging.

Over the years, the Dead Man’s Hand has been mentioned, illustrated, or featured in other ways in many songs, movies, TV shows, books, and video games.

Not only that, but Dead Man’s Hand tattoo art is very popular among both poker players and tattoo enthusiasts in general.

Starting with movies and TV shows that mention the Dead Man’s Hand, one of the earliest ones was the 1939 legendary western film Stagecoach.

It was also directly referenced in the 1962 western film The Man Who Shot Liberty Valance. Both movies were directed by the celebrated director John Ford.

When it comes to songs referencing the Dead Man’s Hand, you can hear this expression in quite a few well-known and popular songs.

Most notably, these include Ace of Spades by Motorhead, Rambling, Gambling Willie by Bob Dylan, and Fire Lake by Bob Seger.

Well-liked video games like Fallout: New Vegas and Heartstone also reference this hand. The former also includes many other gambling themes and references, as it’s set in the post-apocalyptic future in a region surrounding Las Vegas.

You can also find this expression in the classic novel One Flew Over the Cuckoo’s Nest, written by Ken Kesey. It mentioned how the book’s main protagonist, R.P. McMurphy, has a tattoo of aces and eights on one of his shoulders. 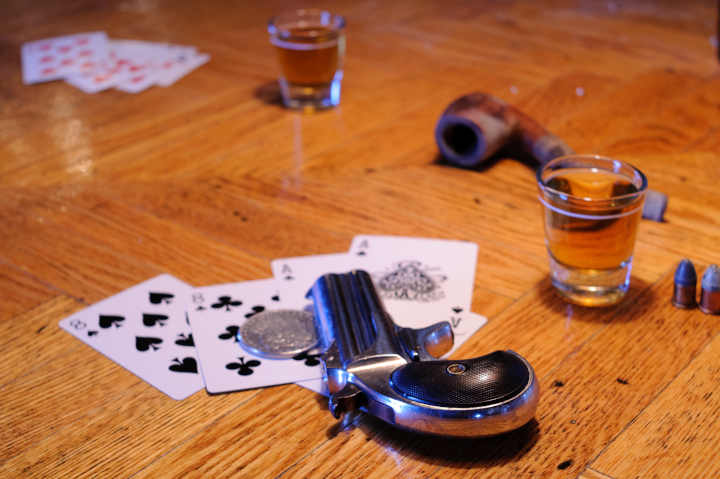 All of these references show how the Dead Man’s Hand became very popular outside of poker and is common in media depictions that aren’t necessarily even connected to the game.

Apart from all of the above art forms, businesses, and organizations referencing the Dead Man’s Hand in some way or the other, perhaps the best and most detailed portrayal is the one in the hit HBO show Deadwood.

This show is set in the 1870s Wild West and the rugged and ruthless life in Deadwood, South Dakota. Deadwood perfectly captures the booming industry and lawlessness of the period, when swindlers and outlaws plagued society.

It also shows how saloons were the set piece for many such incidents. One of these real-life historic occurrences portrayed in Deadwood is the killing of Wild Bill Hickok.

Of course, the characters are fictionalized to a degree, but it’s still very engaging to watch how it plays out in the show.

How to Play the Dead Man’s Hand

The expression Dead Man’s Hand refers to a hand in five-card poker. But nowadays, the term is equally, if not more frequently, used in Texas Hold’em.

If you like playing Texas Hold’em poker, it’s also useful to know how to play this poker hand if you get it. As this hand isn’t necessarily very strong or weak, you can often play it as you prefer.

Moreover, the way you play it also depends on your position.

For example, if you’re in a late position, you can most often call if not raise with this hand. In other positions, it’s often best to fold it, especially if there’s a raise in front. Of course, it also depends on what the board produces. 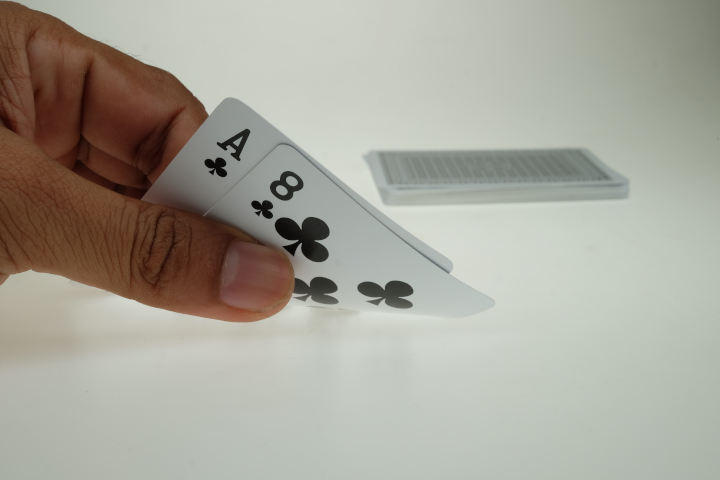 If neither an Ace nor an eight hits the board on the flop, you’ll be in a tough spot and should fold in most situations.

On the other hand, if an eight and an Ace, or even just an Ace, come up on the board, you’ll likely be in a good place to win a solid pot.

If you’re skilled and confident enough, you can even attempt to catch your opponents in a bluff. This is possible if you think that the other player is attempting a bluff with a middle pair on the community board.

As a pair of Aces is the strongest one pair and a pair of eights is also a solid pair, you have a good chance against many hand combinations.

The infamous incident of Jack McCall shooting Wild Bill Hickok will undoubtedly be told by generations of poker players to come.

Even for people that aren’t involved in the poker world to a significant extent, the Dead Man’s Hand might be an association to numerous pop culture works that have referenced it over the years.

Moreover, Wild Bill Hickok remains one of the most iconic folk legends of the Wild West and a lawman that contributed to bringing order to the frontier.

As a devoted gambler, he also frequently played poker. In 1979, Hickok was even inducted into the Poker Hall of Fame as one of the first seven inductees.

Lastly, when it comes to this hand in the context of poker gameplay, many poker players consider it to be an unlucky hand. But, except for the Dead Man’s Hand story, there’s no other evidence to support this belief.

If anything, you can say that an Ace-eight hand in community poker games is a marginal hand. You can use it to grab a nice pot but can also end up losing your bankroll.