Who Was Sam Rothstein? Discover the Truth Behind the Casino Movie Protagonist 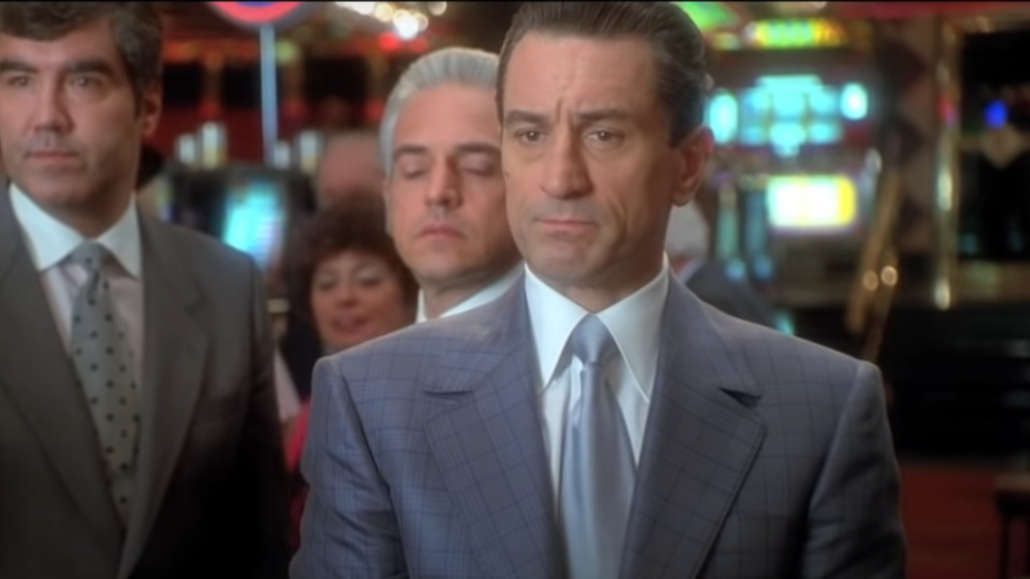 Once in a while, a few movies surpass all of their predecessors and deliver the ultimate story and dose of acting, which is enough to make us watch them repeatedly.

Unfortunately, in history, there are only a handful of such movies.

If you are a gambling enthusiast or like to watch movies depicting the glamour and lavish world of Las Vegas and its 24/7 open casinos, you must check out the legendary movie “Casino”, released in 1995.

Directed by none other than Martin Scorsese, the movie Casino depicts the character of Sam Ace Rothstein.

After its first week in the theatre halls, the movie became an instant blockbuster and was loved by millions.

No one knew that the fantastic mixture of organized crime and casinos depicted in the movie would be so entertaining.

Even so, what people loved the most was the character, Sam Rothstein. His story was the heart and soul of the Casino movie.

Today’s article will examine the truth behind the Sam Rothstein Casino movie and reveal all its secrets.

So, stay with us till the end because we will disclose interesting facts about Sam Rothstein and the movie you will find nowhere else!

The Role of Sam Rothstein in The Movie “Casino”

Sam Ace Rothstein is the protagonist in the movie “Casino” and was the lead role in the film.

Sam Rothstein (De Niro) was a gambling God from the American Jewish ethnicity. His role in the movie is depicted by the fact that he was ordered by ‘Chicago Outfits,’ an Italian organized crime gang, to oversee the operation of the hotel and casino Tangiers Casino in old Las Vegas.

He was the overseer of casino operations in one of the most prominent casinos in Las Vegas and was very thorough in his work.

During one of the scenes, he is seen crushing the hands of people who cheated while playing casino games.

Later in the story, we see that Sam falls in love with a former prostitute named Ginger McKenna.

Both had a daughter after their marriage in 1969. However, the marriage did not last long because of Ginger McKenna’s previous boyfriend, Lester Diamond, who was a con artist.

Sam and Lester got into trouble as Sam catches Lester accepting $25,000 from his wife.

As the story progresses in the movie, eventually, they got divorced as Ginger kidnapped their daughter and planned on eloping with Lester to Europe. 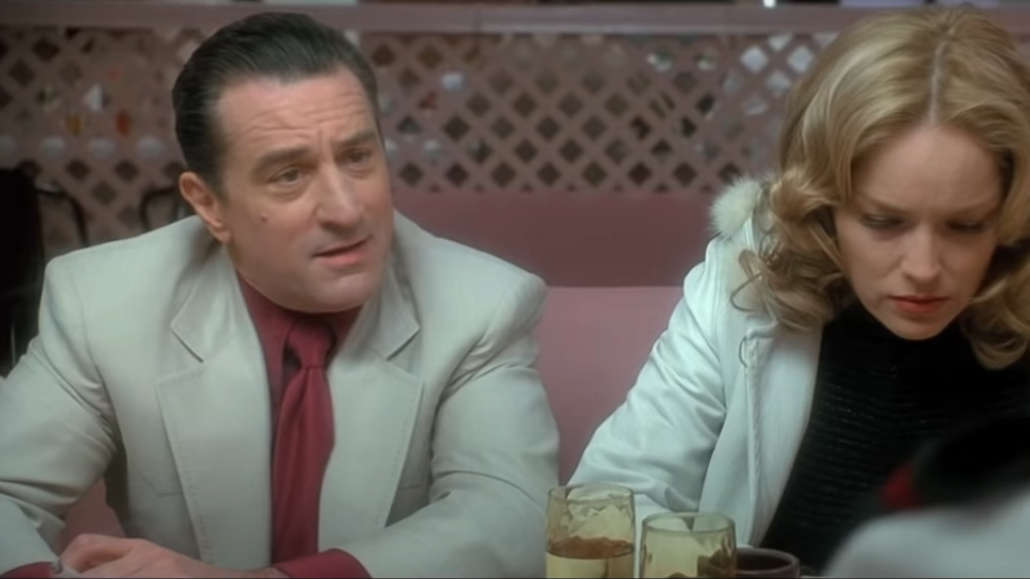 Then the FBI started tracking down the Mafia and their organized crime branches in Las Vegas.

Tangiers was no different, and every crime-related business was checked and brought down by the police.

So then, after rising to the peak of the casino industry, Sam was back at square one and was last spotted as a sports betting handicapper.

Fact 1: The movie Casino 1995 was shot in a real-life casino

The legendary movie Casino was shot in a real-life casino. People might think it was all filmed in a million-dollar film set, but it’s a myth.

Many fans believe that the Las Vegas casino depicted in the movie was fake because of the working hours.

People think casinos also have rules similar to pubs and drinking bars close before midnight worldwide. Therefore, many fans thought that the movie Casino created a fake casino for all the scenes.

But in reality, the Las Vegas Casino depicted in the movie has rules that allow them to operate 24/7 legally.

Fact 2: The actor met the real character he was playing

There are many approaches to acting. Some rehearse their dialogues often, some lock themselves up to get into character, and some meet the person they will depict in a movie, like the legendary actor Robert De Niro.

After the movie “Casino” was set to be produced, Robert De Niro wanted to meet with the real-life protagonist of the soon-to-be film.

So, he met with the actual characters and had a great interactive session. First, he took notes on their behavior, style, and manners.

Then, he copied their personality and soul and delivered them to the audience, which made the movie an all-time favorite of gambling enthusiasts.

Fact 3: Rothstein did not have a proper gaming license in real life

The movie depicts Robert De Niro, a Sam Ace Rothstein, in a casino where he works in many job profiles.

The interesting thing is that he did not have a gaming license in the film, nor did the real-life Sam Rothstein have one.

To stay away from trouble, he was given non-essential titles in the casino.

The mob thought that due to his connection with the mafia at that time, he would pose some problems in acquiring a gaming license.

Fact 4: The movie Casino had no definite storyline

The Casino was a great movie that has become evergreen in the hearts of Robert De Niro fans.

A fantastic film like that must have been planned for years, and they must have prepared the storyline beforehand. It is what you might be thinking right now.

However, the movie had no plot! It is not some fan theory but has been confirmed by none other than Martin Scorsese.

In an old interview, Martin Scorsese is seen admitting that the movie Casino had no plot and they were following the real life events to the best of their instincts. It shows the level of mastery the director had!

As you already know, they altered many names for legal reasons in the movie, and so did the names of the evildoers.

By 1970 it was common knowledge that the Chicago outfit was the primary crime syndicate running the gambling world, but this fact was left out of the movie.

The movie never mentioned the name Chicago outfit as the controlling mafia.

In the movie Casino, Nicky Santoro and his brother Dominic Santoro were killed brutally. It was undoubtedly one of the most gruesome deaths in Hollywood history.

They were brutally beaten with baseball bats and dumped in a cornfield to die slowly.

However, the reality was completely different.

The confirmed police reports were not published until the film was released in the theatre, so the writers had no way of knowing the way they really died.

Fact 7: Sam “Ace” Rothstein was a spy from the police

Frank always backed his statement of not being a snitch with immense confidence, and in the past, he said that he has never testified against anyone and will not do that even if he has had a recent life threat in a car bombing.

However, the press reported later that Frank was an FBI informant working undercover to break the backbone of organized crime by destroying their cash flow chain using casinos. 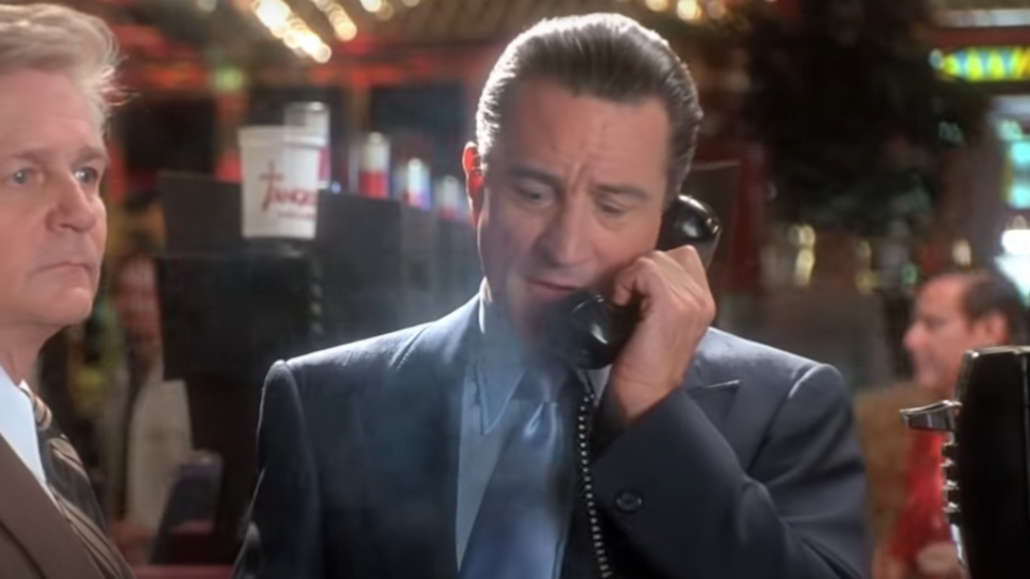 Fact 8: The Tangiers was a combination of three casinos

But in the movie, there was only one casino: Tangiers. Tangiers was based on the Stardust casino.

However, the exterior of the Tangiers casino was shot outside “The Landmark” casino, which was closed during the shooting period. In addition, the interiors were from the “Riviera” Casino.

There is no doubt that there was a period when crime lords and the mafia kings controlled a major part of gambling across Las Vegas casinos.

For example, the movie “Casino” depicted perfectly how organized crime mobs used to run brick-and-mortar casinos in the city.

They were designed to suck every last bit of money the customers had.

Their ideology was to make the punters play longer. As they play more, they lose more.

If we compare the casinos from the movie and the ones we see nowadays, we will not see much difference.

The only significant difference is the crime syndicates have folded and made a run for it.

Now casinos are entirely legal and can only operate if they have a proper gaming license.

Moreover, now there are strict rules for casinos that break the vicious cycle of go, bet and lose.

Now punters have better control of their finances and have access to better financial tools to help them keep track of their spending.

In addition, now we have better responsible gambling laws that prohibit casinos from false advertising and misleading things and ban advertisements that might attract underage gambling.

In short, the gambling world has become much safer than before, and plenty of safety nets cover your back.

But, when talking about modern casinos, how can we forget online casinos, which are the future of gambling!

Online casinos are more famous than brick-and-mortar casinos nowadays because of their convenience and easy access.

Online casinos make it much easier for players to deposit and withdraw money.

Moreover, you can play thousands of popular games under one roof. Who does not want to swim in the ocean of slots? That is what you get when you sign up with an online casino.

The movie “Casino” was a great success for its story taken from an actual life event. Many loved how the story progressed and depicted the corrupt gambling world.

This movie is the actual life history book of the gambling world.

By watching this movie and analyzing the characters like Sam Ace Rothstein, we can see how far we have come.

Was crushing the hands of a cheater a common thing for Frank Rosenthal?

In the movie Casino, people saw that those who cheat in the casino owned by Sam Rothstein would get their hands crushed.

In one of the scenes, we see two punters using electronic signals to talk to each other and cheating on casino games.

When they get caught, Sam crushes their hands in the movie.

However, if you ask the real deal, Frank Rosenthal accepts that the hand-crushing event did happen but not under the circumstances depicted in the film.

Was the love story depicted in the movie “Casino” real?

The Casino was a crime thriller movie depicting the world of casinos, so people might not think of it as a love story.

However, there are parts where we get to peek into the life of Frank Rosenthal, aka Sam Rothstein.

In the movie, we see Frank and Geraldine Rosenthal as the real-life Romeo and Juliet who had a daughter together.

How many casinos were managed by Sam Ace Rothstein?

According to the movie “Casino”, there was only a single casino managed by Sam Ace Rothstein.

However, in real life, Frank “Lefty” Rosenthal ran four casinos simultaneously, including the Stardust, Hacienda, Fremont and Marina, for the Chicago mafia.

The Stardust was renamed the Tangiers in the movie for legal reasons.

What was the result of Sam Rothstein attempting to get a gaming license?

Like many others, Sam did try to get his business in the good books, so he went ahead to get a betting license.

But unfortunately, when he did, he was dragged into an argument with the current Senate Majority Leader, Harry Reid, eventually losing the gaming license in 1988.

Was Frank Rosenthal responsible for bringing down the casino industry’s organized crime?

Yes, without a doubt, Frank Rosenthal was the most significant contributor in bringing down the crime bosses.

He did that by helping the FBI in a secret mission. Unfortunately, this is not depicted in the movie Casino, as the police withheld this information from the public during the shooting of the film. 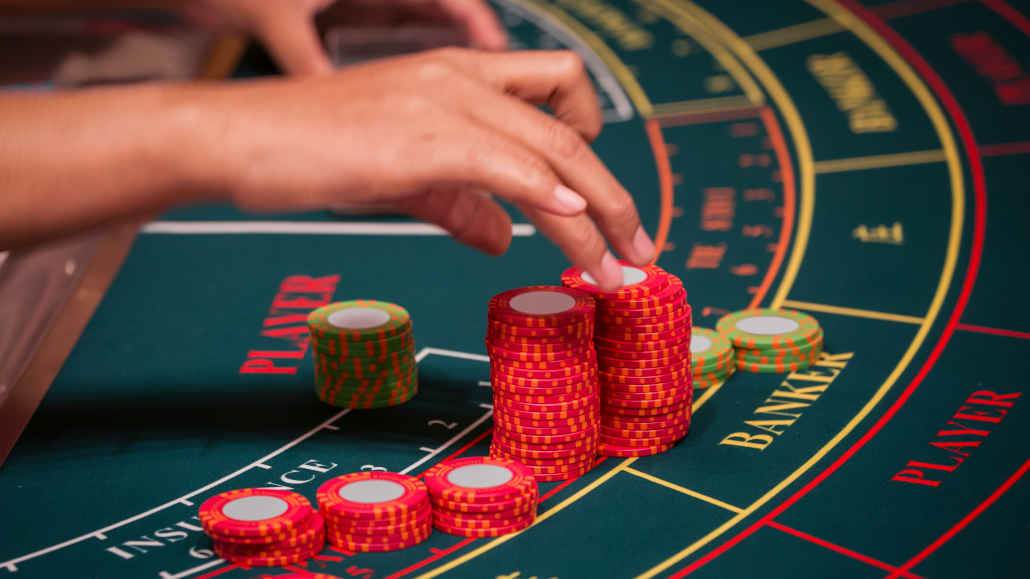 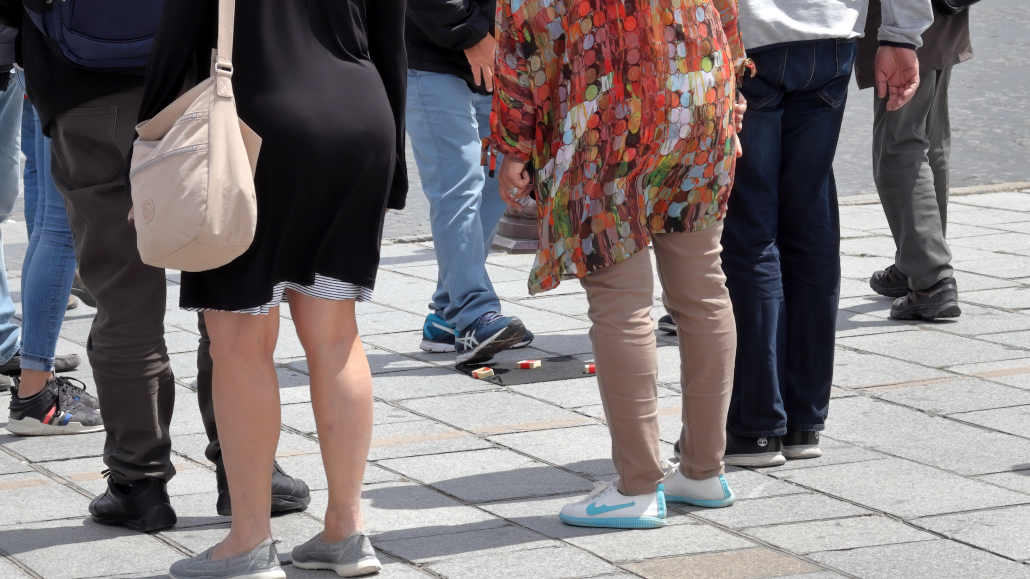 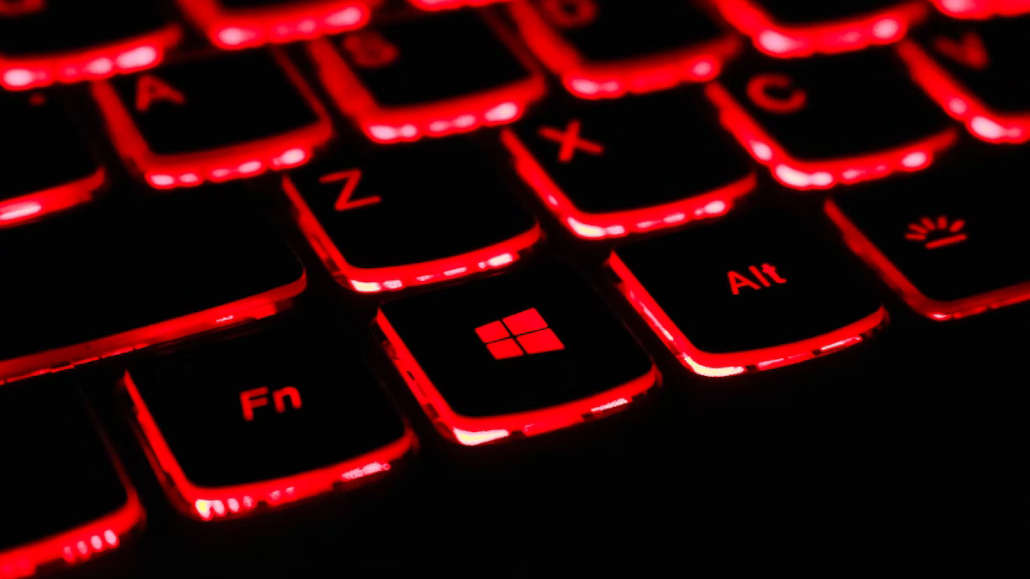